Skip to main content
Reminders
You are here: Research ›

Multitouch computing offers a wide range of opportunities for the development and play of recreational games. Indeed, it provides many of the modern features of video-games : automated assistance for novice players or capability to network players around the larger world. Adapting board games on digital surfaces is a challenging project. The aim is to take most of the technology without losing the rich social face-to-face aspect of a real physical game. The use of tabletops allows users to keep this social aspect, thanks to its similarity with a real table. yet, other details need to be considered. One difficult point, in particular, is the player's "hand of cards" : how to integrate private areas in a collaborative system ? How to design user-friendly interaction techniques between private and shared areas ?

Using the strategy board game Dominion, we have created different ways of exchanging cards between private and shared surfaces. The shared surface is a tabletop while private surfaces are android tablets.

This project also involves the use of a Kinect to identify the users and their tablet along with the design of a visual feedback of information transfer between the devices.

Digital tabletops present an opportunity to combine the social advantages of traditional board games with the automated features and reactive gameplay of video games. However, it is unclear whether the addition of automation enhances or detracts from the game experience. In a collaborative project between NSERC SurfNet researchers at the Queen's University and the University of Waterloo, a joint study was undertaken that investigated groups playing different versions of the cooperative board game Pandemic, with varying degrees of automation. During the study, 12 groups of players played three different versions of the Pandemic game, each version representing a different combination of media (physical, digital tabletop) and level of automation (low automation, high automation). Analysis of the study data, focused on the impact of the automation on gameplay found that the way in which changes in game state are presented strongly influence players' strategies for collaboratively understanding the game state, and affects players' trust in the fairness of computerized opponents. Furthermore, this analysis revealed that players value flexibility in the enforcement of rules, including the ability to "take back" moves, reinterpret game mechanics, and perform "what-if" scenarios. An advantage of the physical board game that should be considered in the design of future digital tabletop board games was also discovered:  free table space surrounding the board game surface was used by players to readily organize and manage game-related roles, responsibilities, and resources.

Pandemic by Z-Man Games is a collaborative board game in which player's must work to cure outbreaks for disease.  The spread of disease is dictated by cards drawn at the end of each turn. 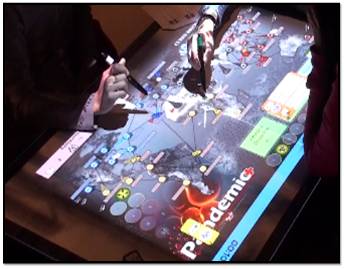 Historical board gaming, or "wargaming", is a genre of combat and strategy games which deal with actual historical conflicts. Co-developed by University of Waterloo professor Neil Randall, Pax Romana is a board wargame which covers the political and military history of the Mediterranean from the third century BCE through to the end of the first century CE. This is a complicated game with hundreds of game pieces and dozens of pages of intricate rules. The rules require frequent use of tables and formulas to calculate various game effects, and gameplay itself can span 40 hours or more for a single campaign. 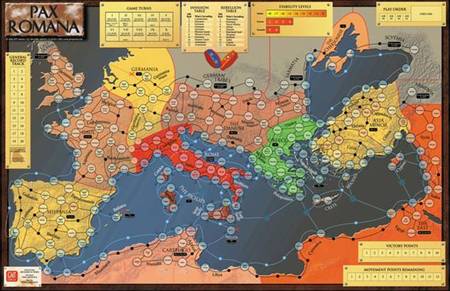 The complexity of Pax Romana and similar games in its genre has long been a barrier to new players. In order to make the game easier to learn and play, this project is investigating the adaptation of the traditional Pax Romana game to a digital tabletop computer application, allowing automation to be introduced to simplify some of the game's more tedious and time-consuming aspects, while endeavoring to maintain the social and strategic elements which make the game "fun". Further research topics in this area may include exploration of computer-enforced rules, the use of mobile/private devices for each player, and the integration of tangible game elements (such as dice and game cards).

Pinning this post will make it stay at the top of its channel and widgets.

This pin will expire , on